Do You Think That There Should be This Many Rules For Sports? 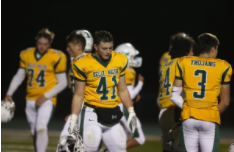 Wyoming High School Rules, Regulations, and Procedures that were put in place during the 2020 Football Season.

Rules while in the team box on the sidelines

During this season the team box will be extended to the 10-yard line of both sides of the field (players only) so that they can maintain a good amount of social distancing space for each team. You were also not allowed to share uniforms, towels or any other equipment.

Rules and Procedures For The Ball

The ball has to be sanitized and cleaned throughout the game and whenever it is necessary. The ball holders on the sideline also have to stay 6 feet away from anybody else in order to try to keep the ball sanitized.

During the game and while you are playing, face masks are being allowed to wear. If you are not wearing a helmet on the sideline you must have a mask on, coaches are included in this rule.

Both before and after the game all handshakes will be are not allowed to happen. This is because of the social distancing rule that is in place.

Final Rules That are in Place

During, before, and after players and all staff should wash and sanitize their hands as often as possible. Along with having your own gear you should also bring your own drink for the game.